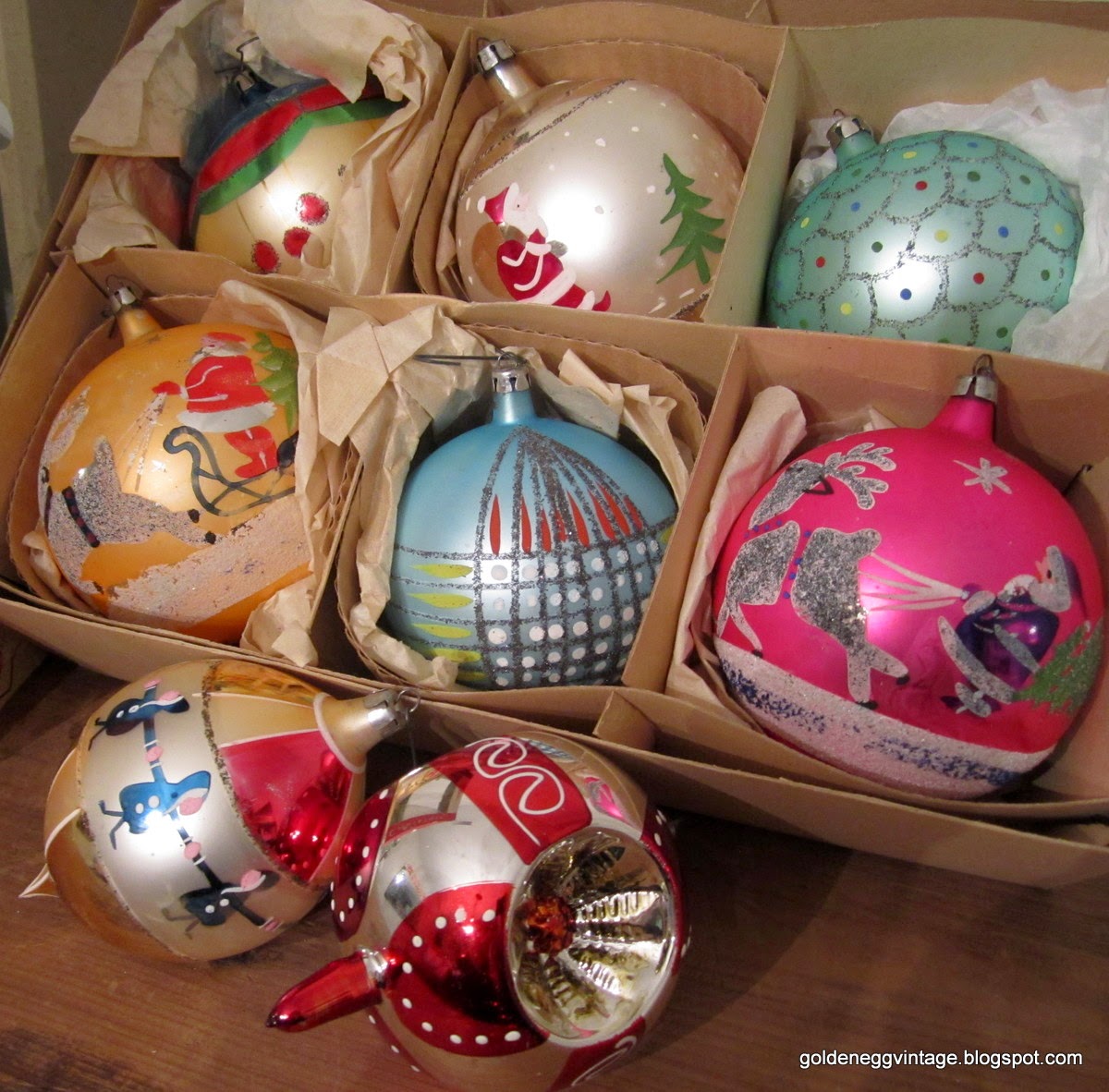 Hi Friends! I hope you're all doing well. I'm doing pretty well myself. I'm all healed from my gall bladder removal. Thank you so much for your kind words! I appreciated it so much.

So anyway,  here are some recent finds. From the flea market, these ornaments are huge! Like grapefruit sized. I'm not sure I really like how big they are, but I do love that hot pink one! 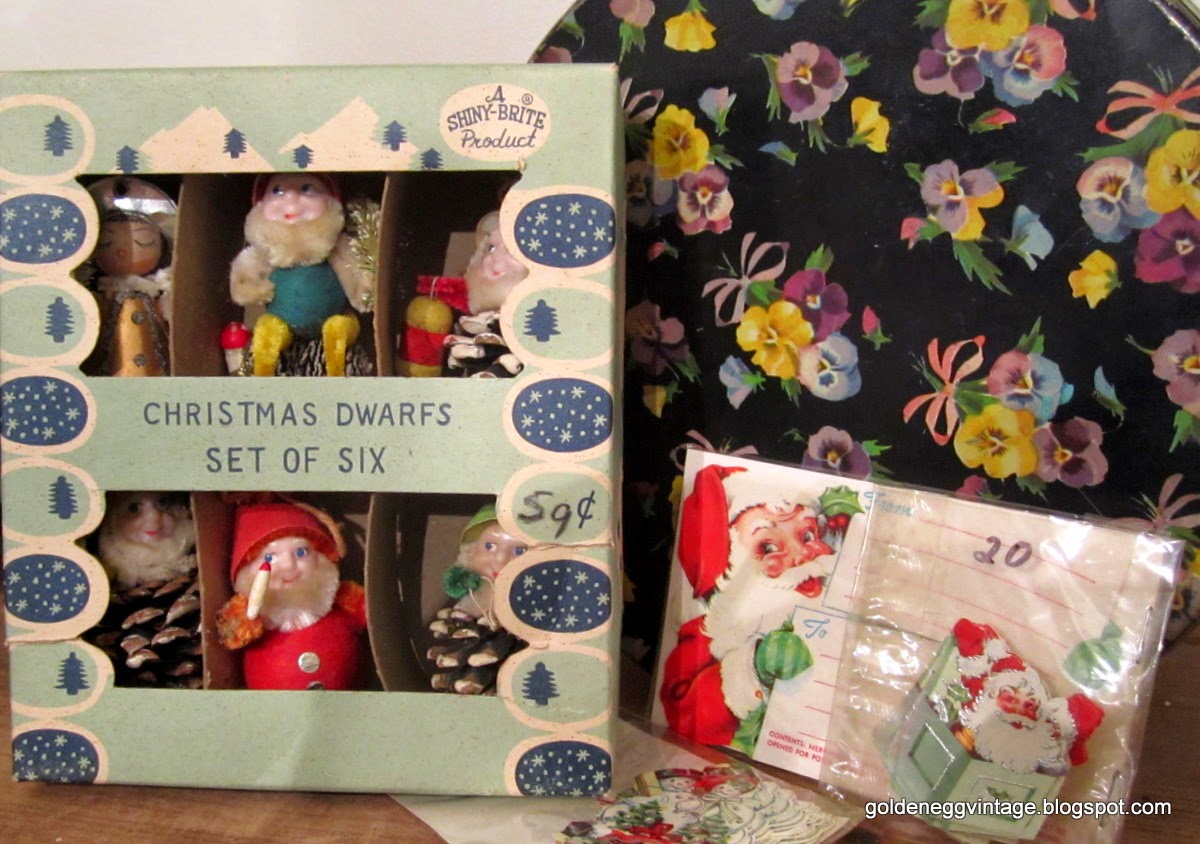 The same seller had cleaned out her mother in-laws home, and also had the box of dwarfs, the bells and foil leafs below.  From a different seller I bought this old button tin with the pansies. It's super deep, and I can tell that it used to have a handle. More x-mas seals! Because I'm addicted. 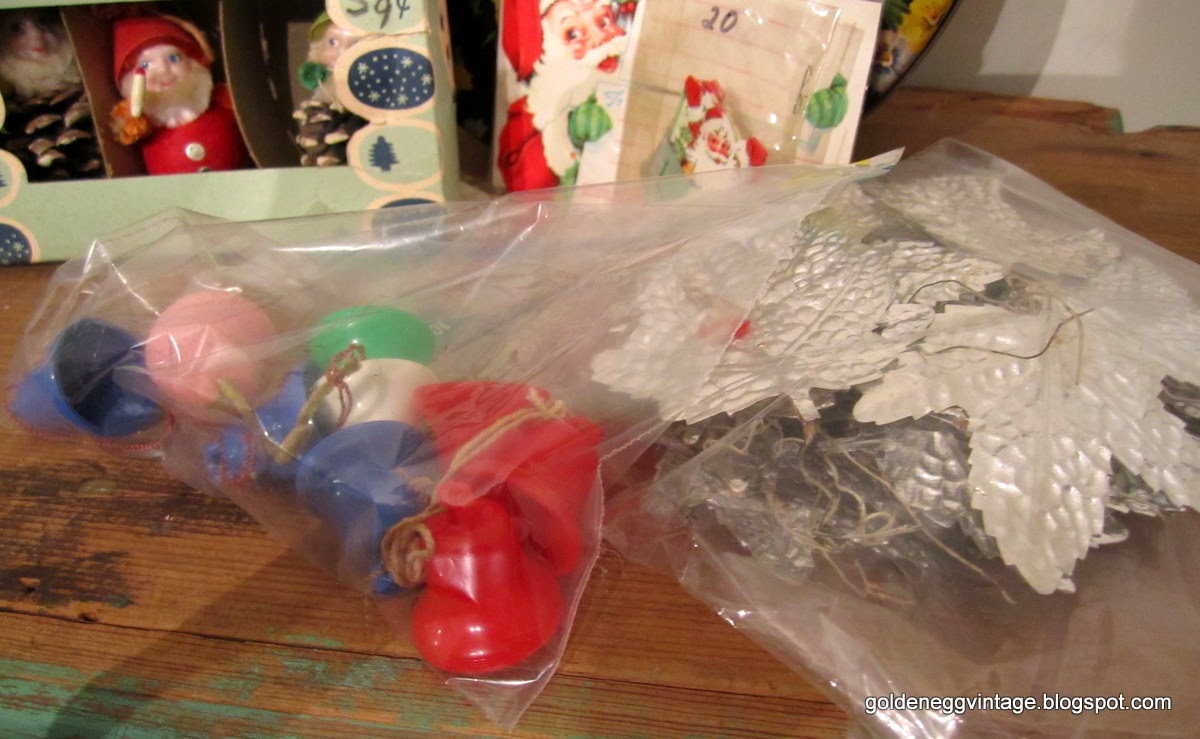 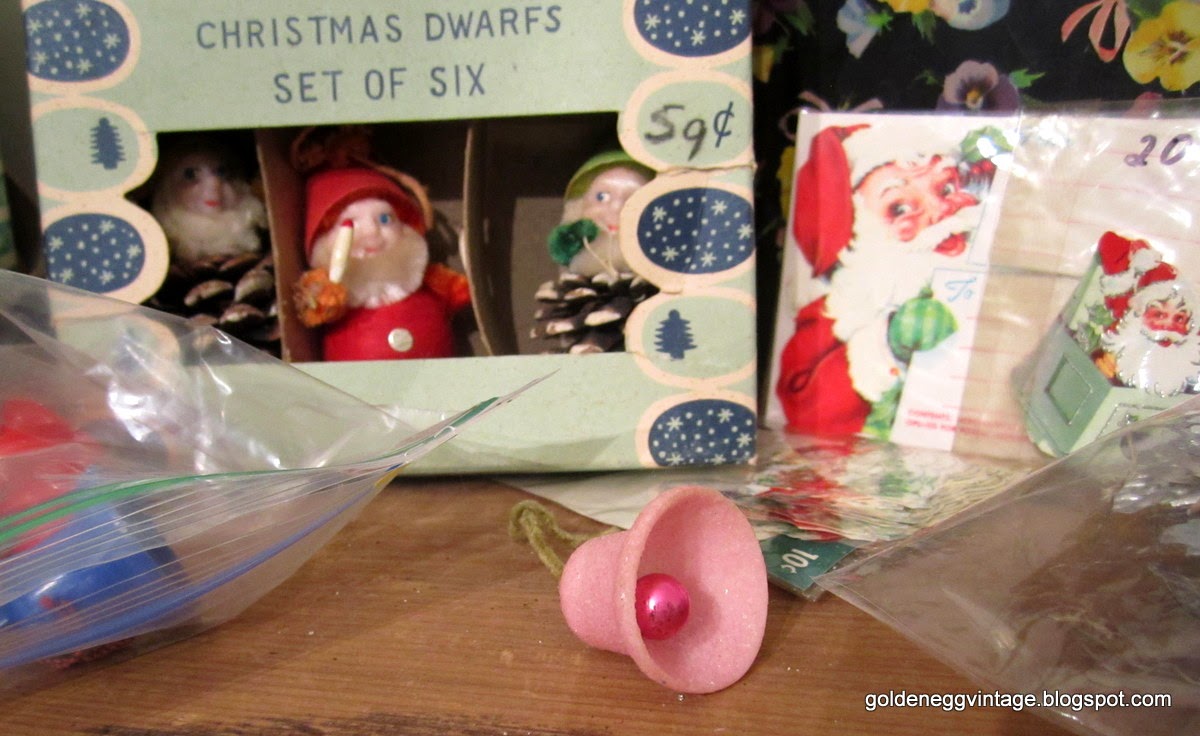 I love this pink bell! It's covered in mica, and I'm going to make a corsage with it. 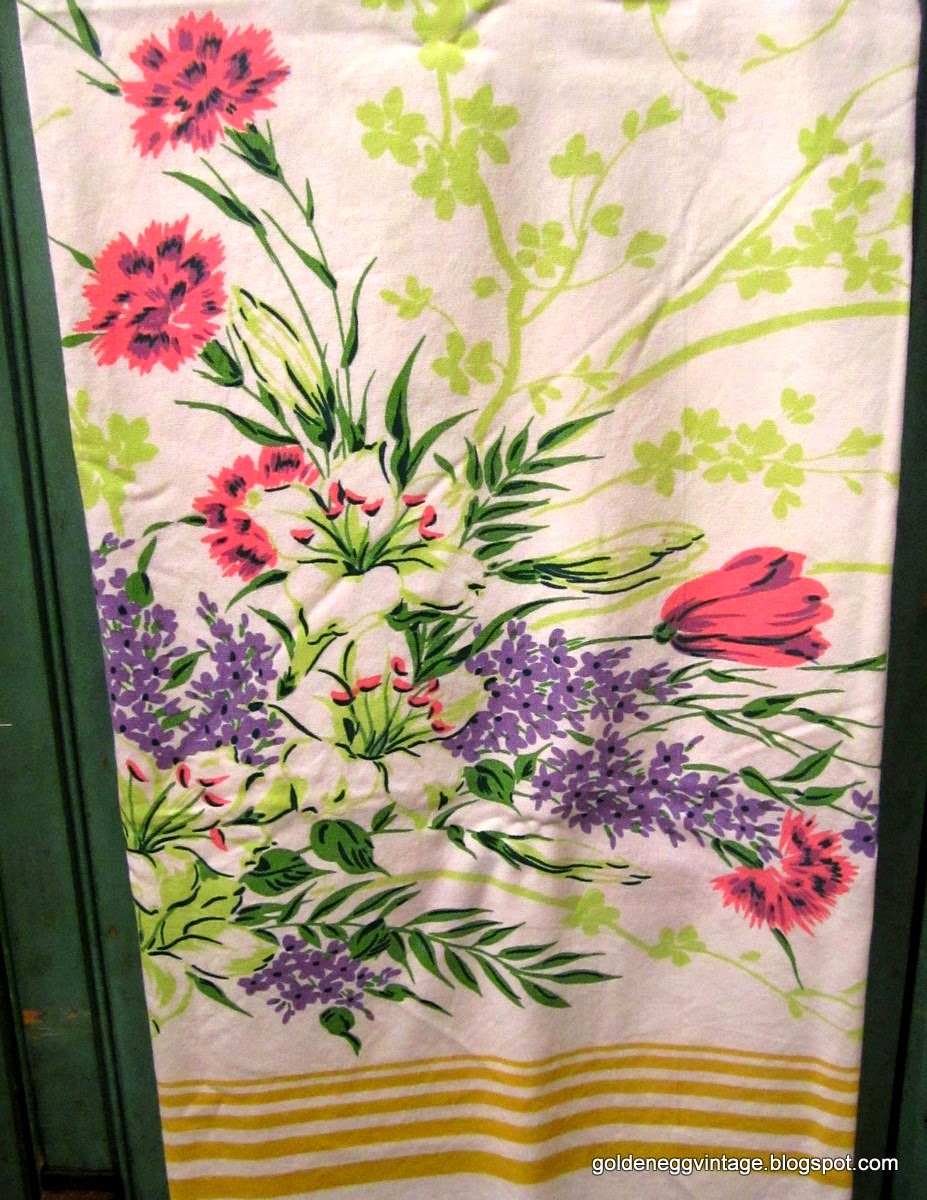 This was at Goodwill the other night!
I always check the linen section just in case....and it FINALLY happened! It's large and clean with no holes! 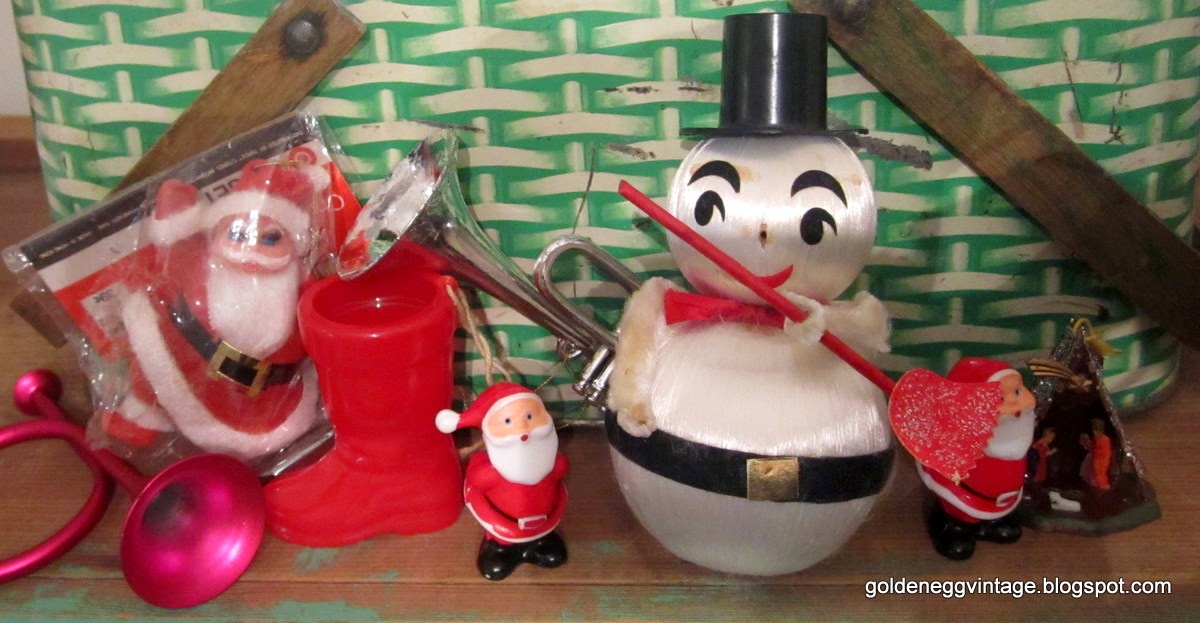 Today I ran to two estate sales. The first one was so over-priced, it was a joke. Like the solid colored Shiny Brites were $3.00 each...so the full box was $36.00! hahahahah
But I was able to dig in a .50 basket and came up with these few pieces. The Snowman will get a little rehab. The second sale was a bust.
I'm heading to the flea market in the morning. So here's hoping! I haven't been to this one yet this year. Hope it's good!
OK- Have a great weekend. :)
Erica

ps.  I went to my (5 year old) niece's ball game the other night.
Here are pictures I took of each of the kids.
I love being an auntie to these 3 babes! 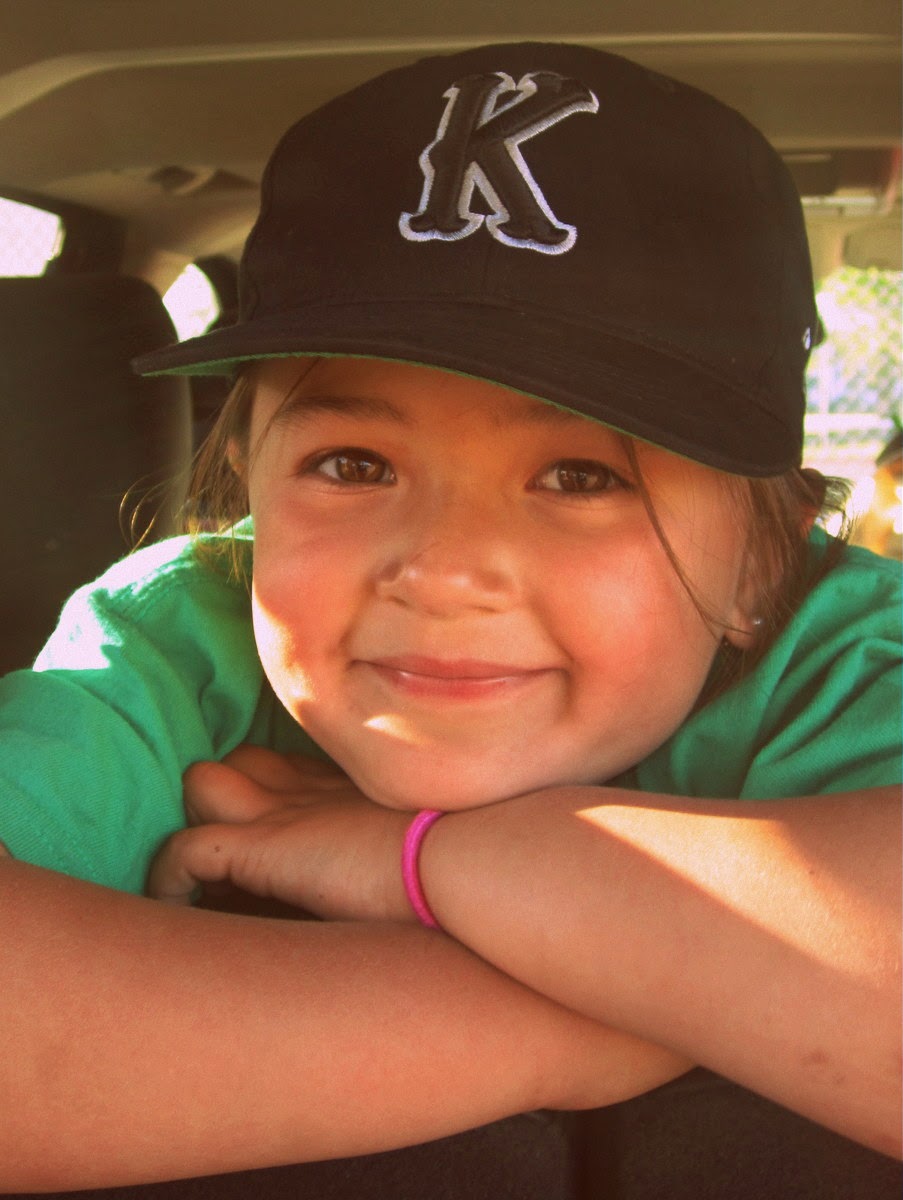 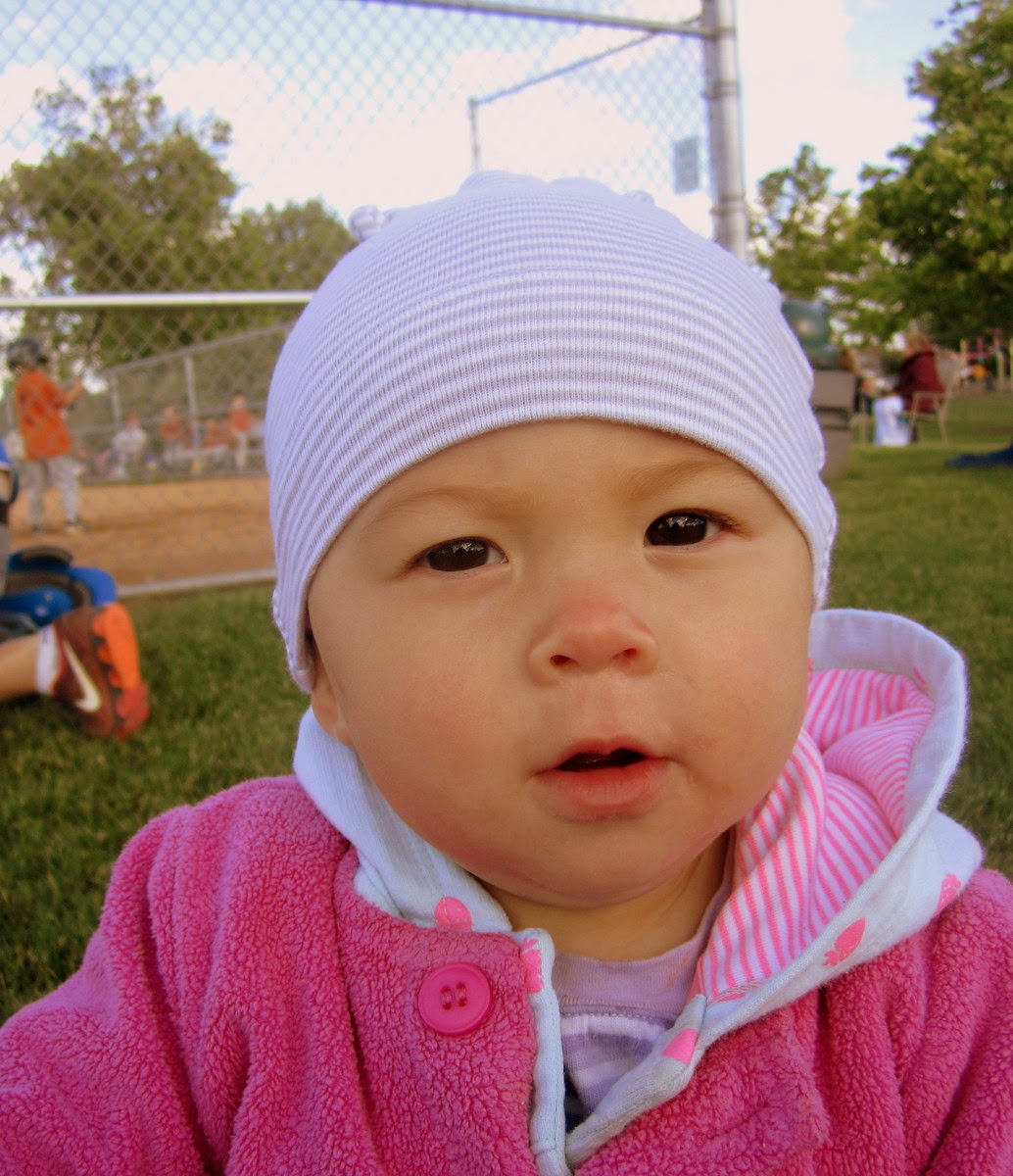 And Drew is almost 10 months!

Posted by Erica of Golden Egg Vintage at 8:20 PM 22 comments:

Well That Was Fun! 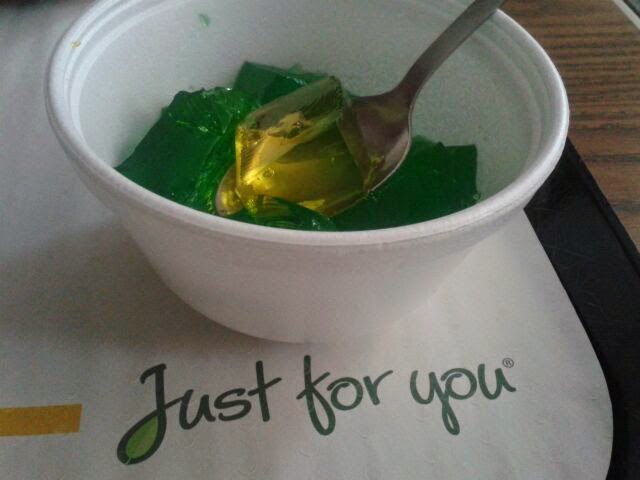 On Sunday I didn't feel well. I woke up with a bad burning kind of pain up under my ribs. I've had these attacks before, and they are excruciating. But usually I can head into the E.R. and they give me something for it. I've told them each time that I'm certain it's my gall bladder, but they've always insisted that "nope, it's just really bad heart burn".  This time though, the gall stones finally showed up on the ultra sound and so I was admitted right away. 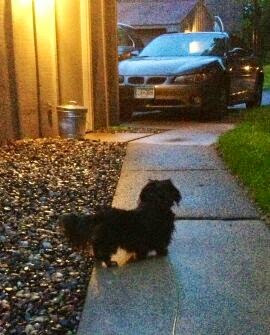 I had to stay two nights in the hospital. Poor Wellie! She thought I was just going to Target or something, but then I didn't come back. Here she is waiting for me to come around the corner. Soooo sad! lol So anyway...now I'm home and minus a gall bladder. Spending lots of time on the couch because it feels like I've done 1000 sit-ups. Fun fun! 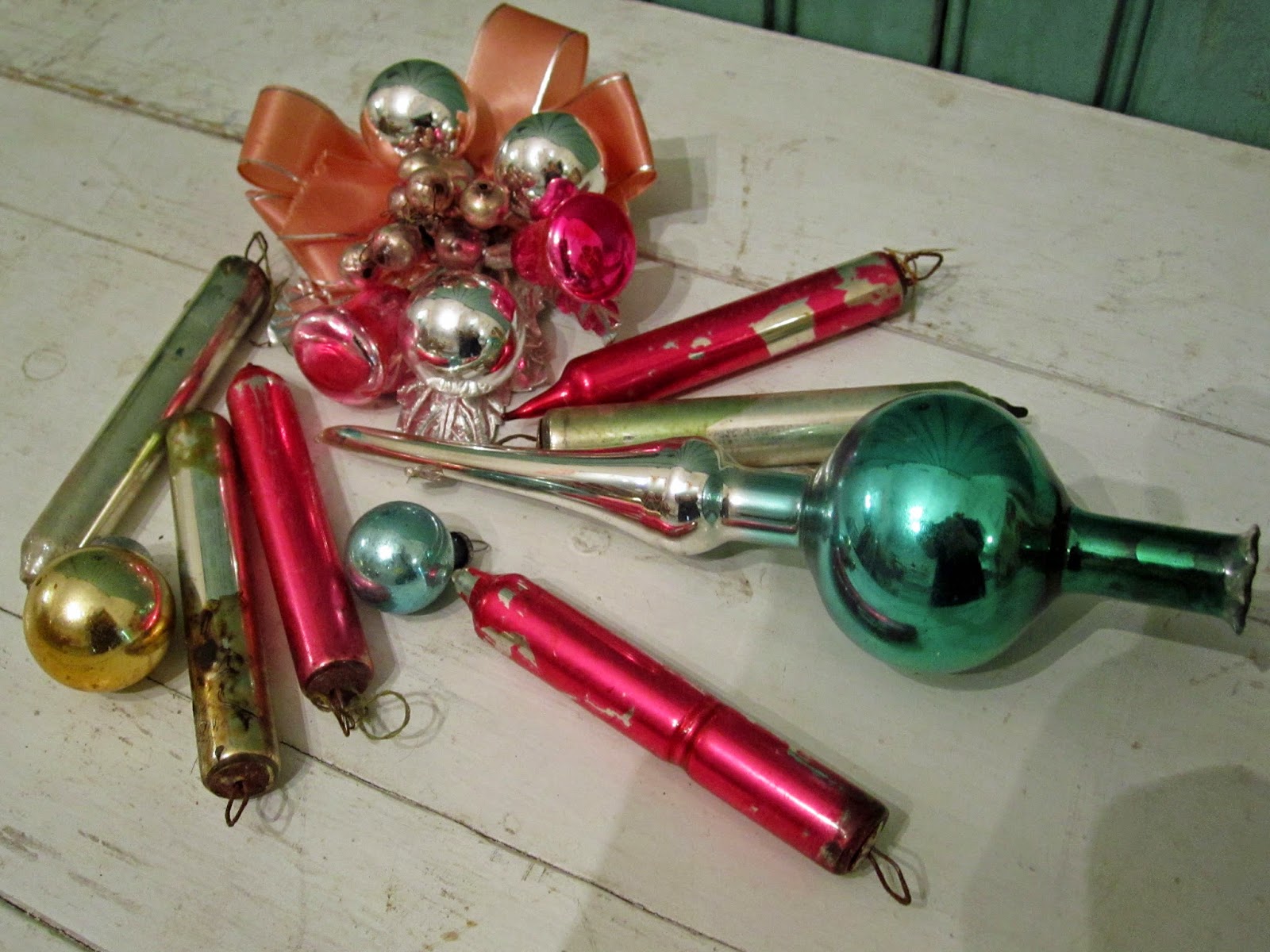 The previous Sunday though, I was able to hit up the flea market. I found a little bit of x-mas! 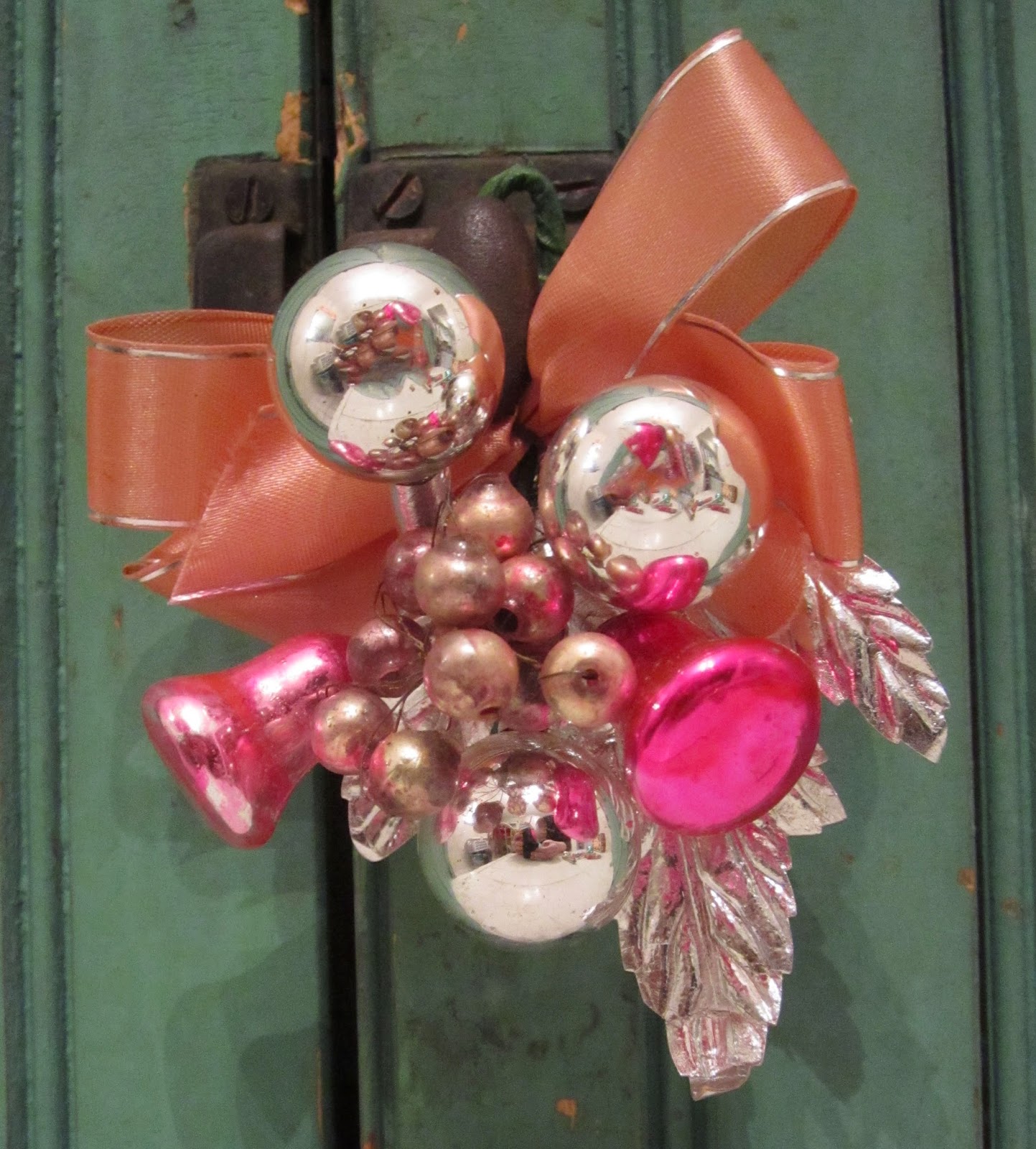 My vintage x-mas corsage collection has really grown. I've never put them all together though. Might have to do that! 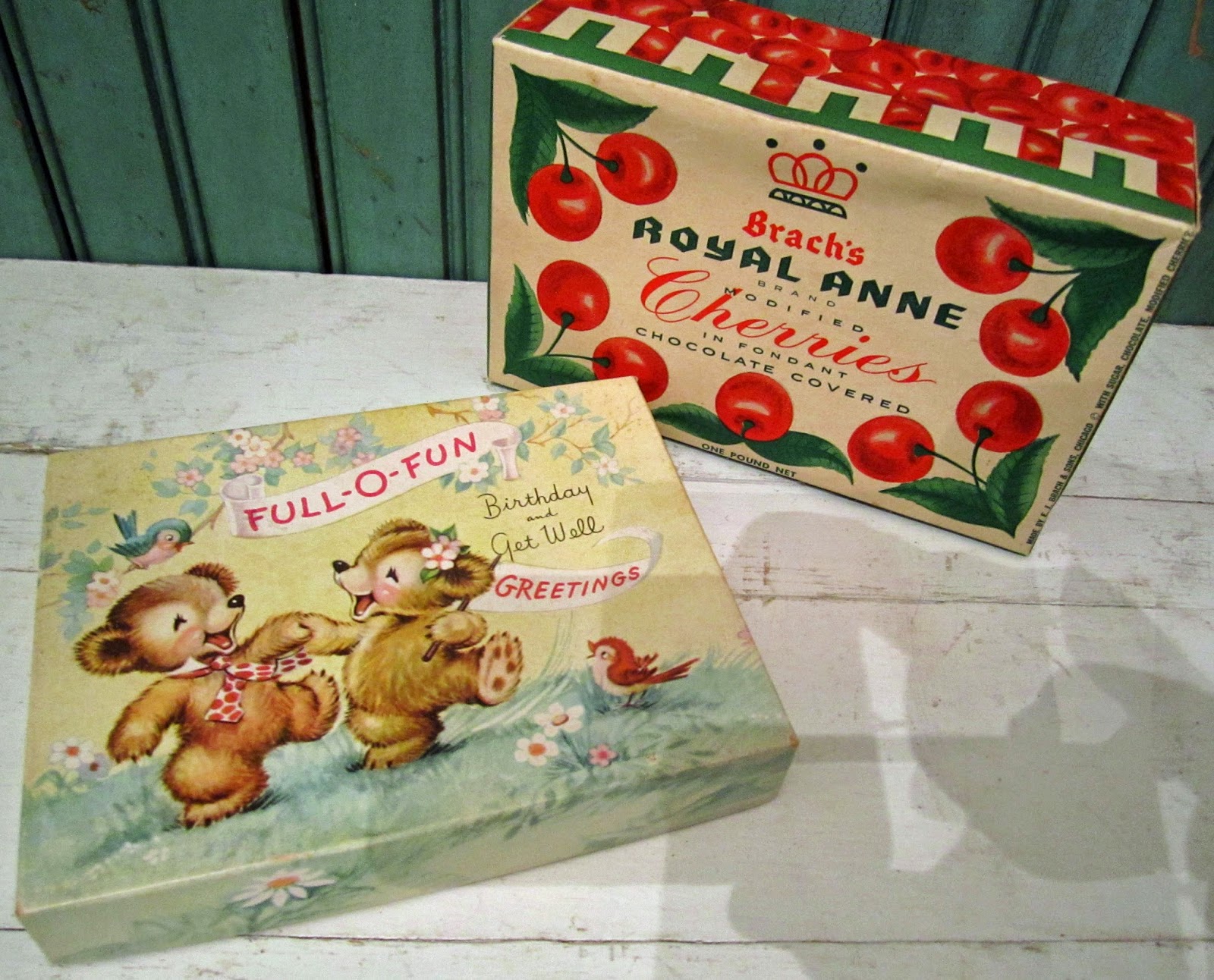 I found a chocolate covered cherry box, and a darling boxed set of greeting cards! 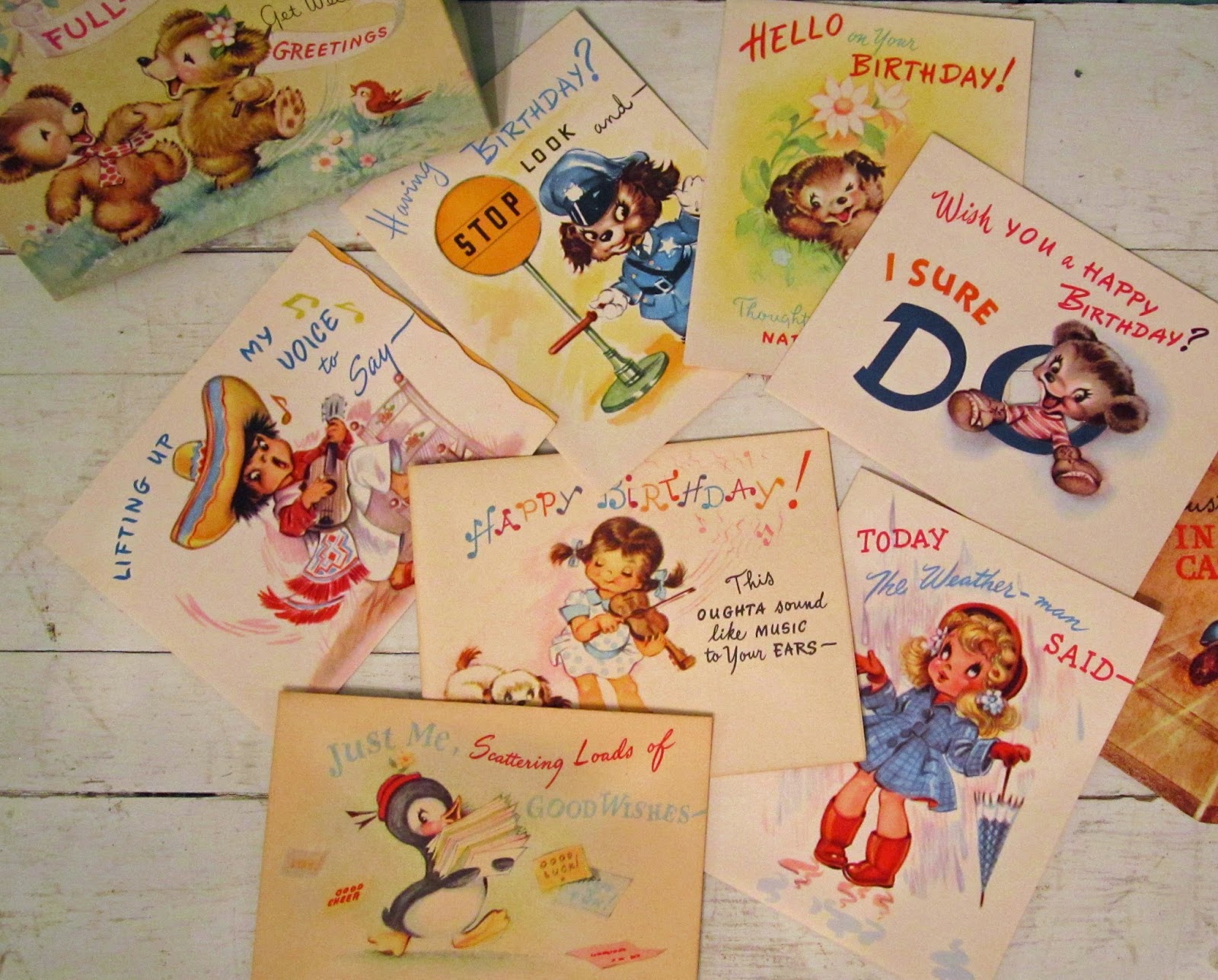 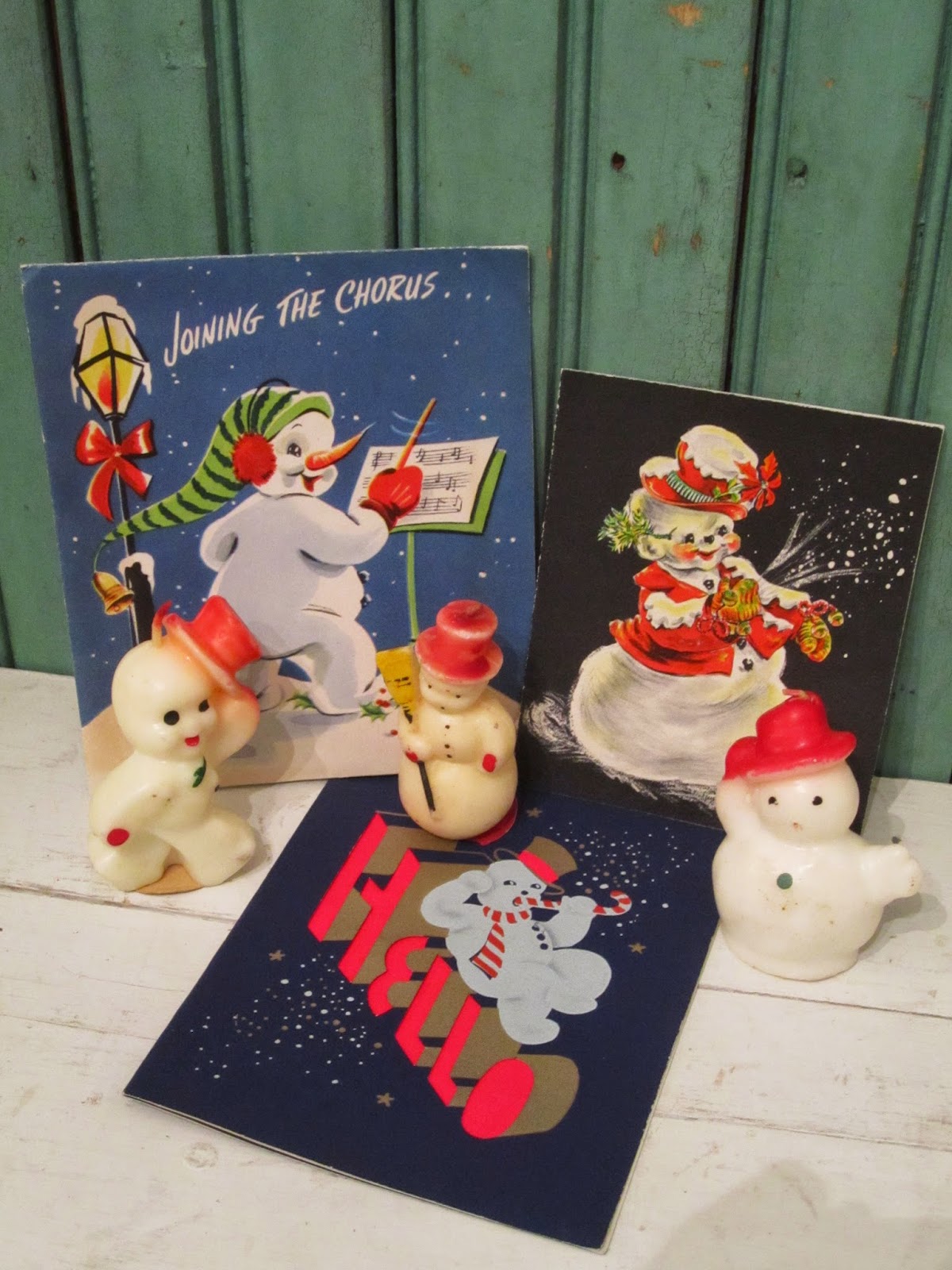 There was a box full of Gurley candles...like tons of them. But I only let myself pick out a couple Snowmen. And the cards were from the same seller as these wonderful x-mas seals below. 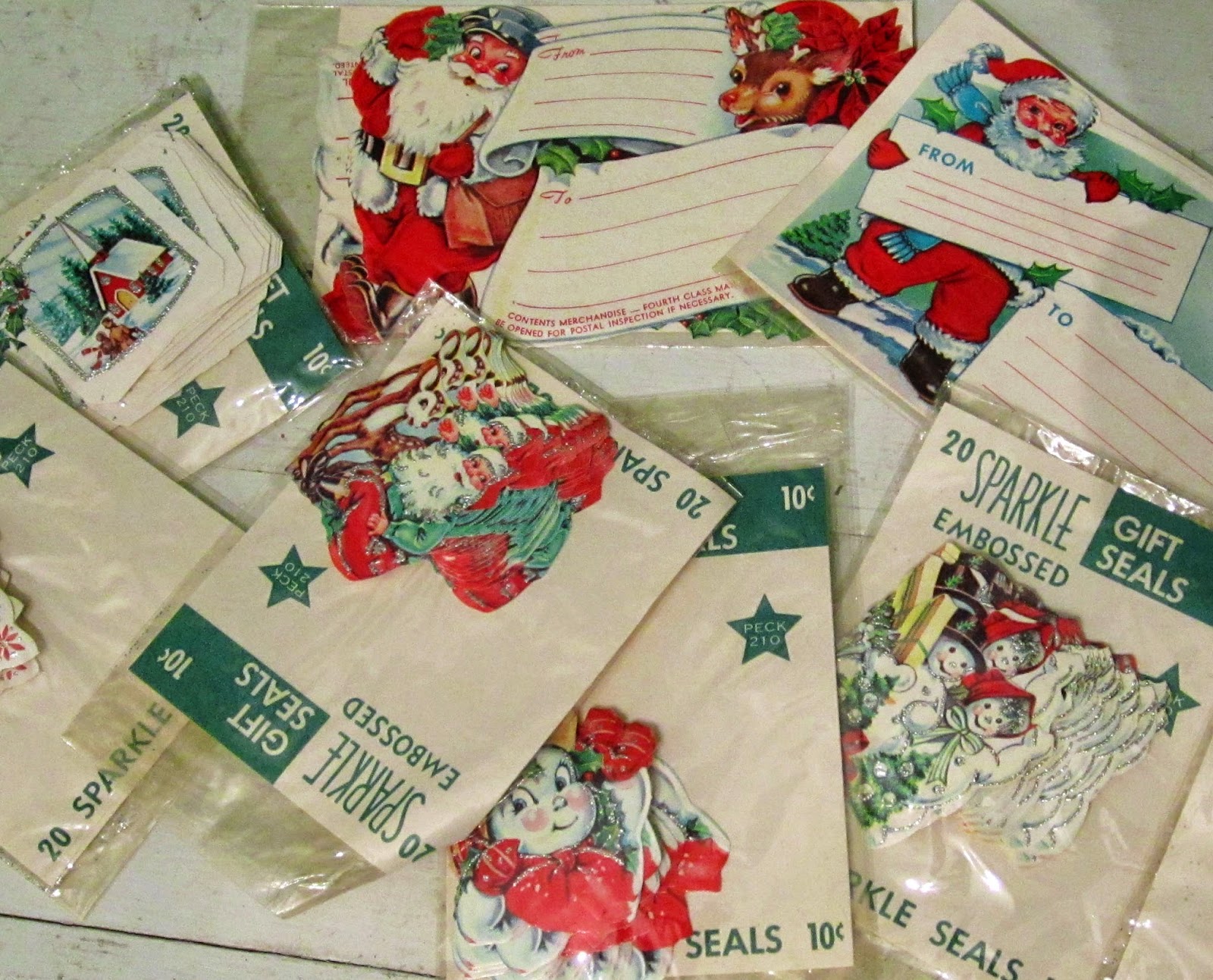 This guy had dozens of unopened packages of seals! I think I bought 9 of them, but I wished I could have taken them all! Why can't I get enough of stuff like this?? lol 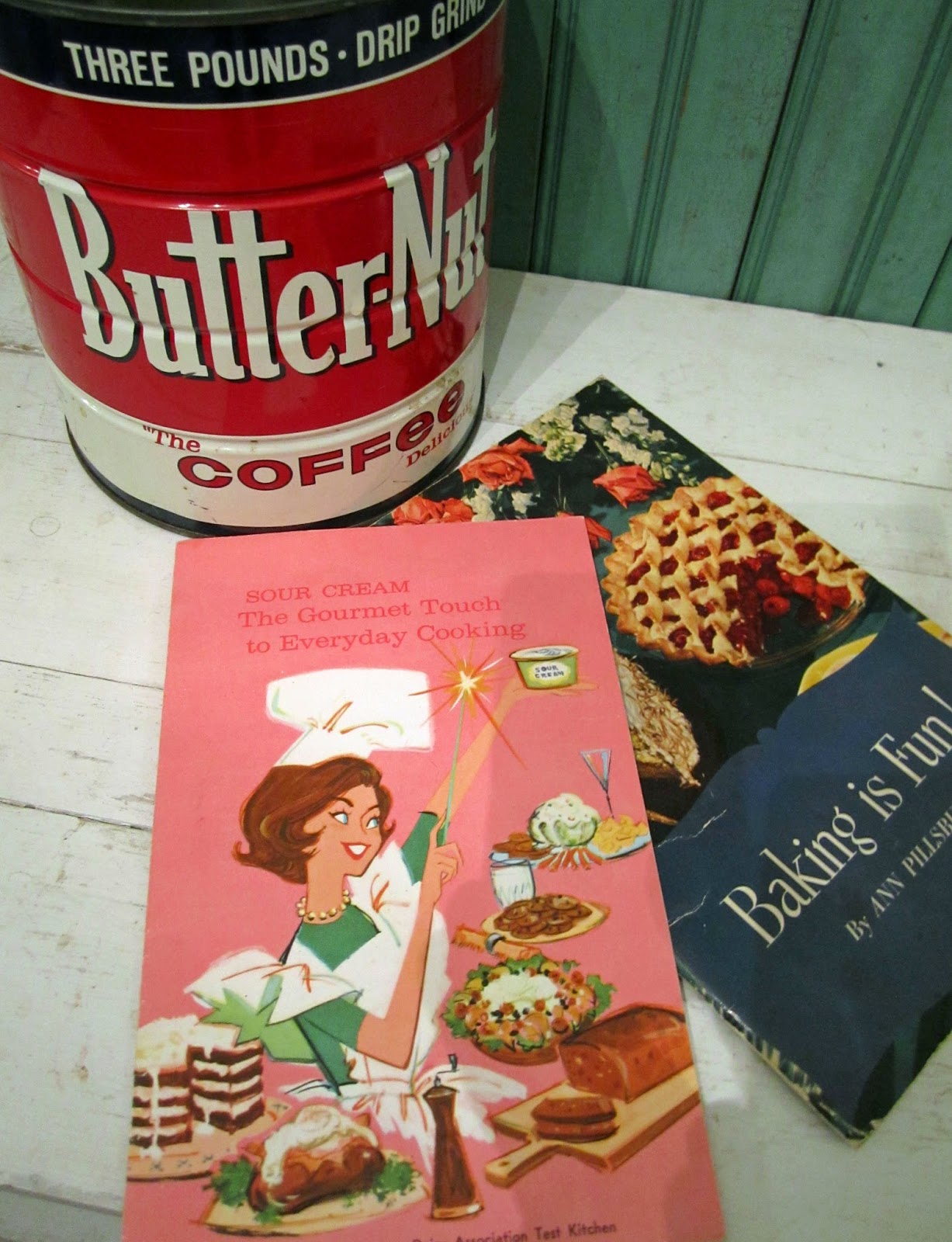 Then the other day I went to an estate sale right before it was closing. Here's what I grabbed for a TOTAL of $2.00! A couple recipe books, a coffee can, and... 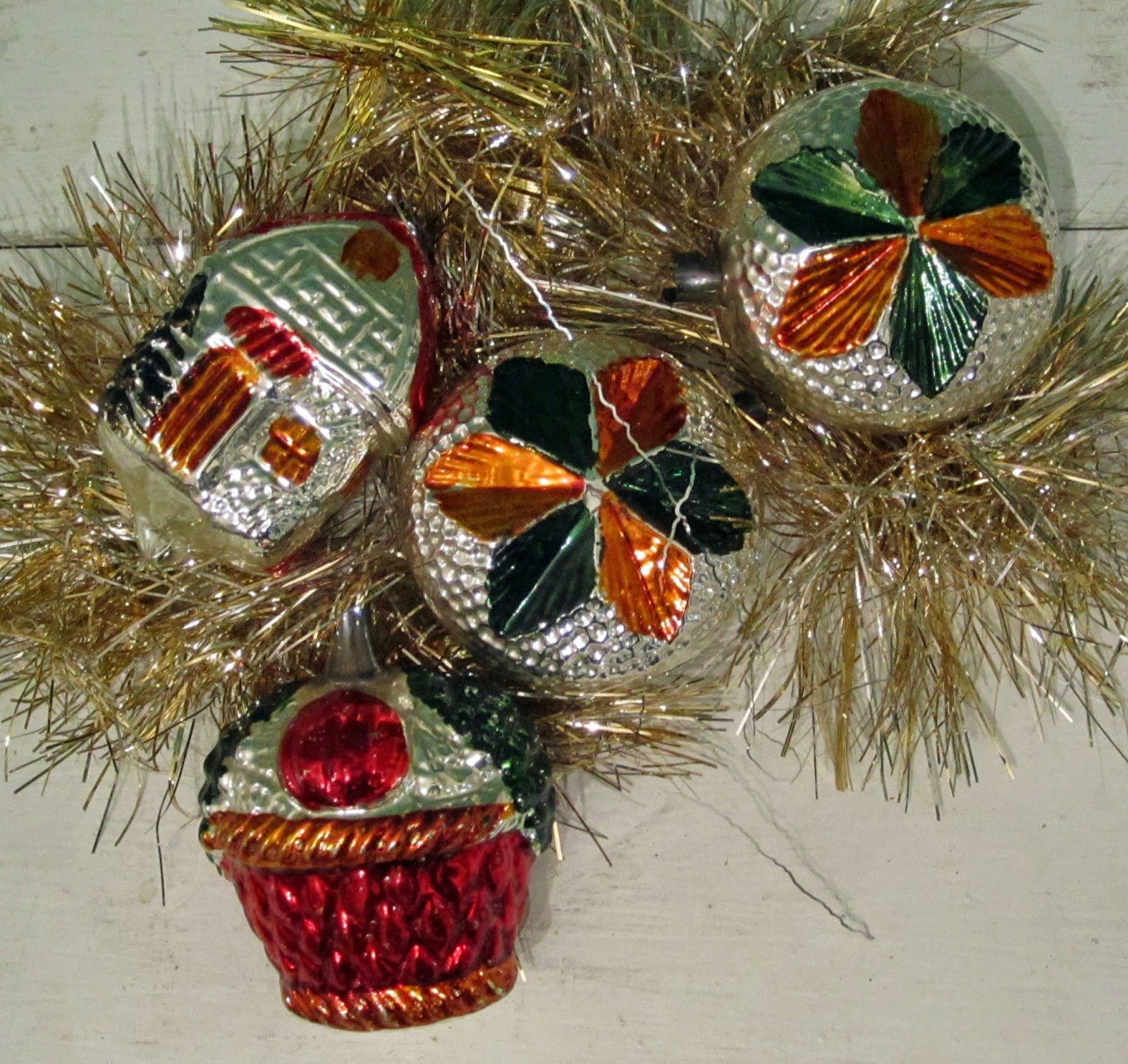 The people running the sale said that it was a 92 year old man that had moved from the home. The basement must have had tons of x-mas stuff, because there were many boxes of tinsel and lights still left. But I was able to dig and find a few ornaments that people missed. 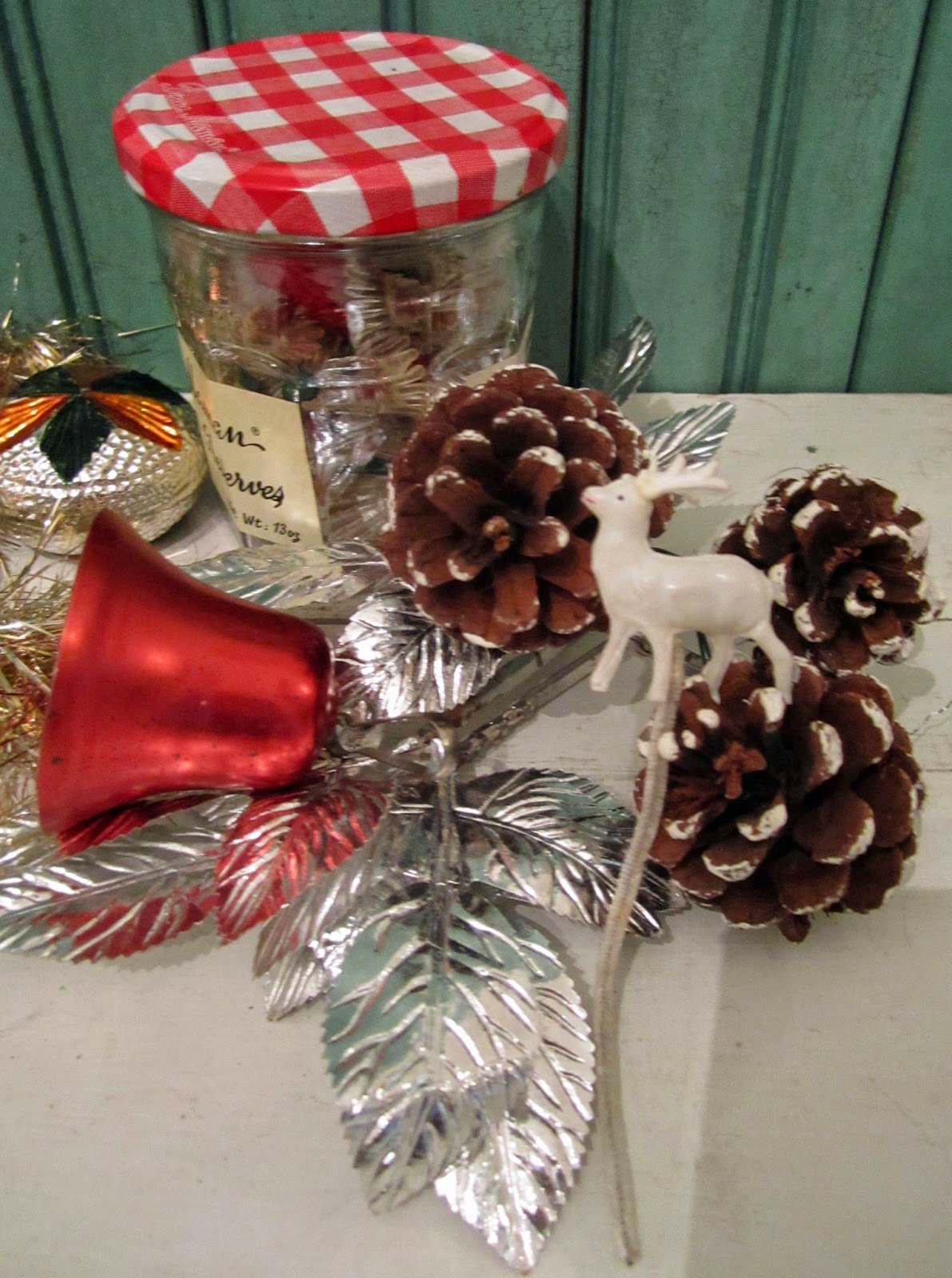 A jar of mini light reflectors and some odds and ends. 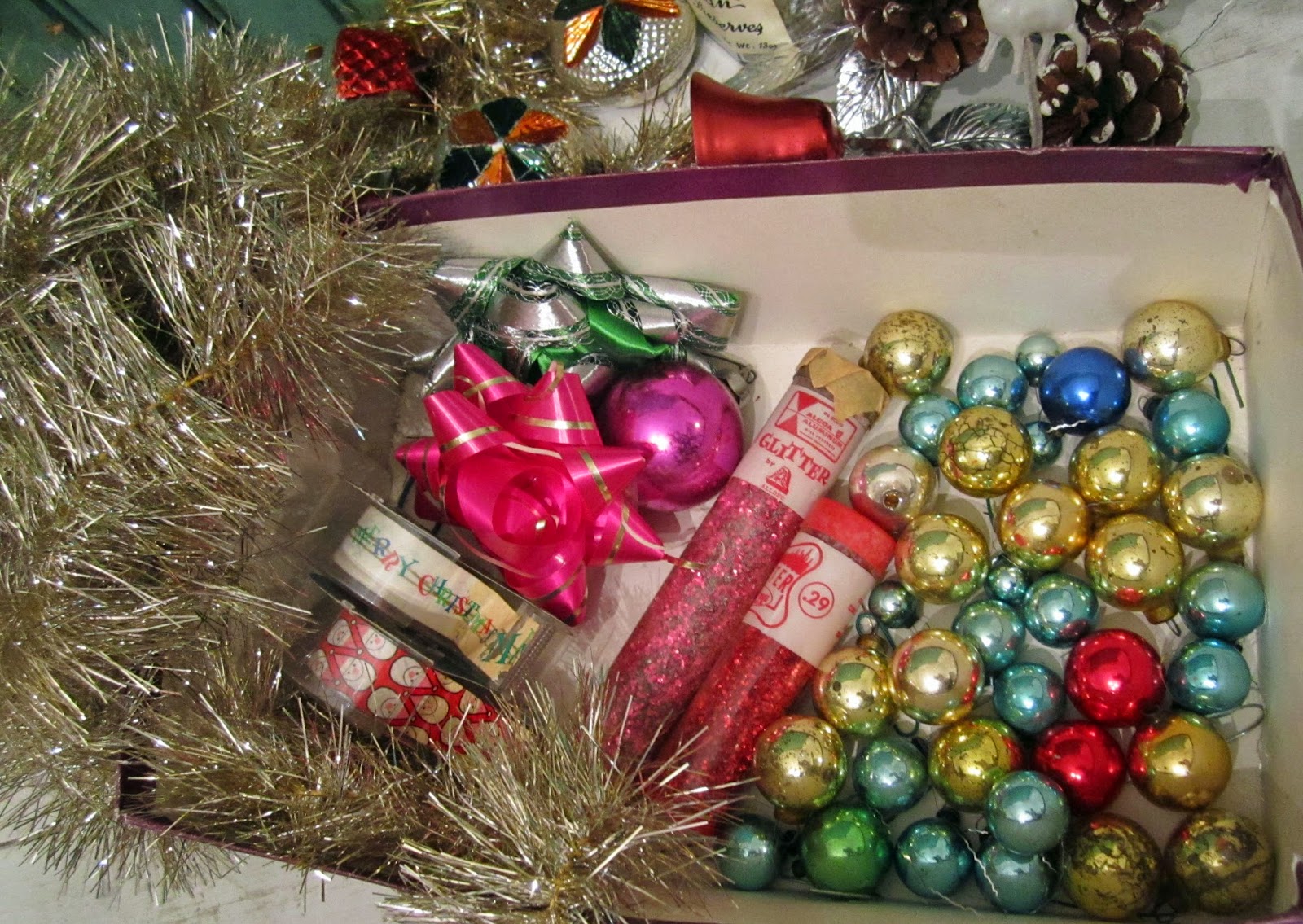 If you grab a box and start tossing all the tiny glass ornaments that you come across into it, eventually you usually end up with a nice little pile. I love that large vile of pink glitter too!
Not bad for $2.00 right before closing time!
OK- Hope you all are having a nice week! I've been catching up on blog reading since I'm confined to the couch. So if I haven't visited you yet, I will be very soon!
Hugs- Erica :)
﻿
Posted by Erica of Golden Egg Vintage at 3:07 PM 33 comments: 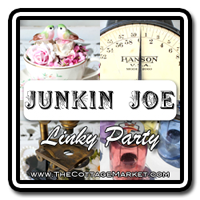 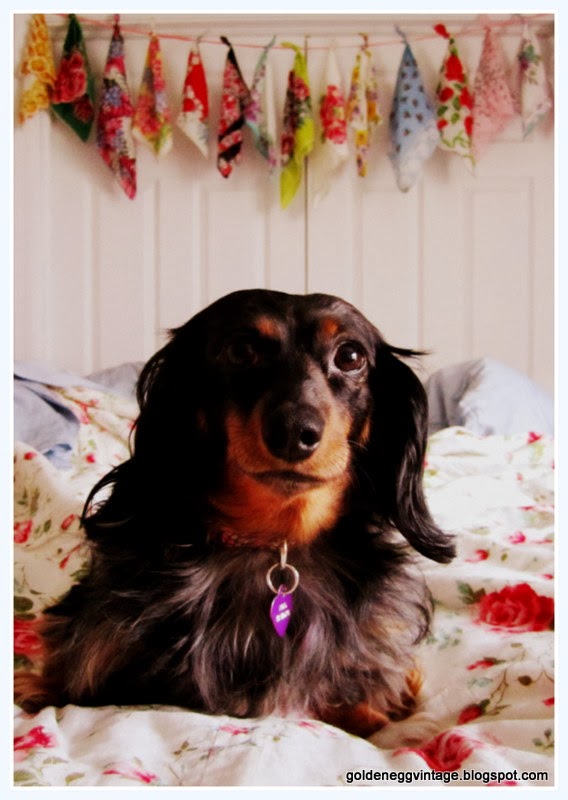 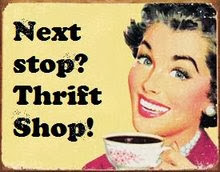